Attah Ameh-Oboni‘s memory is still very alive in Idah, more than five decades after his passing.
The recent installation of Idakwo Michael Ameh-Oboni as the new Attah-Igala naturally makes many     to recall his father who reigned as Attah Igala between 1946 and 1956.It is really hard to think of one and not remember the other, because, quite naturally, they bear the same surname, and the mind has a remarkable way of linking both. Again, at his recent installation in Idah, the excited townspeople referred to a statement uttered by the Attah’s late father that Igalaland won’t see development until Michael Ameh-Oboni, the son of Ameh-Oboni, sits on the throne as Attah-Igala.
Today, some 57 years later and in partial fulfillment of those words, this has come to pass. Thus the ascension to the throne of a son of Ameh Oboni at the present time is an event of great significance to many in Igalaland. People speak of a fresh burst of development which would soon ripple across the land. Ameh-Oboni was an Attah gifted in many ways, and some say that he was a powerful clairvoyant, and had a connection with the forces of nature. Events in the life and reign of Ameh-Oboni seem to confirm this impression of his being a gifted One. Witness: On one occasion an Eagle swooped and picked a chick from the ground. Ameh-Oboni who was present spoke out and ordered the Eagle to return the Chick, which it immediately did to the surprise of many. Such tales are very popular in Idah today. Another popular account holds that he made a tree to wither within a day when he spoke to it. Other  traditions  speak of him banishing barreness  and witchcraft from Igalaland, which he did with a powerful volition as well as the  sheer strength of the spoken word. At the heart of all these feats was a desire by the Attah to use his gifts to help his people, whether it be by  the means of banishing witchcraft, or helping women out of barreness,or  tackling some other looming problem. In sum, he put his gifts at the service of his people.


Chief John Egwemi, Onu Ibaji also comments on the remarkable life of Ameh Oboni. According to him “He was famous for various reasons.He had the power of making pronouncements which  came to pass.When  he came to the throne people in Idah were living in thatched houses,and he said that during his reign people will have money to build cement block houses roofed with zinc. Then all of a sudden this happened. He had other powers too. For instance, if someone misbehaved he had the power to say what would happen to such a person for either disrespecting him as Attah, or flouting the laws of the land. What he said always came to pass. So people knew that he had such powers. He was quite powerful, and was a real African traditional ruler. He was powerful because he would say things, and such will happen.” Patrick Achoboni also sheds light on the life of Ameh-Oboni.
His words “He ruled for ten years and these were explosive and unforgettable years. People say he ruled like Ayegba  Om’Idoko,a powerful Attah of long ago. Some viewed him as a supernatural human being. He could speak powerfully, and whatever he said would come to pass.”
Philip Adejo Odekina comments on some of the gifts of Ameh-Oboni. According to him “It is not common for  anyone to tell a flying bird or a kite that  had picked a chick from the ground, to bring back the chick and it brought it back to the spot. He also cursed the sources of illness in Igalaland, and such were no longer seen. It is not possible that a tree would dry up between   today and tomorrow .He cursed a tree which was being inhabited by witches. He spoke to the tree and it dried up.”
His many firsts 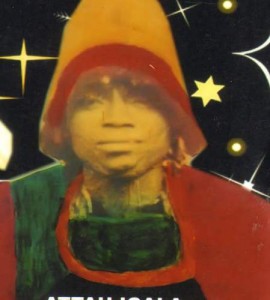 There was no aerodrome in Idah before Ameh-Oboni became Attah Igala.  In the 50s and 60s it was common for most towns to have an aerodrome, and in some cases, to actually have an airport built. During his reign the town now had an aerodrome for the first time in its history. Idah was slowly becoming as modern as any other Nigerian town. Attah-Igala actually joined his people in communal labour to cut down trees and clear the land for the proposed aerodrome.According to the current Attah-Igala in Ameh The Great (1989) “Everybody including the Attah himself came to the site with his machete and hoe. In the presence of everybody, His Royal Highness Attah Ameh Oboni pulled off his flowing gown and started work. His Royal Highness worked till late afternoon and from that day till the construction was completed, he participated fully and his presence acted as a tonic to the people.” The architecture and skyline of Idah were rapidly changing. Boarding primary schools were also initiated during his tenure as Attah-Igala.
One afternoon he left the palace and asked to be driven to the Church, where he discussed with the Missionaries in Idah, about extending western education to his people.  Ameh The Great describes this in the following words “He wanted all the nineteen district headquarters in Igalaland to have at least one primary school of their own…which would be financed by the Igala Native Authority and free so that the children of the poor in the society could benefit.”
He gave a lot of attention to the riverside at Idah where “an all season paved road harbor complete with ship anchorage and well laid steps from the river banks to the ware houses” was commissioned by Attah Ameh-Oboni. Onu Ibaji sheds light on the circumstances that eventually led to the death of Attah Ameh-Oboni.
His words “people were a bit uncomfortable with his powers. Some eyed the throne, thinking that when they are there, they will be powerful too. They wanted him out so that they could become the Attah, even if they were not qualified. So, there were some petitions against him to the colonial authorities that he was making sacrifices of human beings to some idols in the land. He tried to defend himself that he wasn’t sacrificing human beings, but when people plan against you, it’s like giving a dog a bad name. Finally, he was dethroned and before committing suicide he cursed Dekina and so many people. He spoke of a punishment for each of those who wrote petitions against him. Like the young man who did the writing, he said he will not live with the right hand with which he wrote the petition, and it will go before he does. The man’s hand dried up in consequence of an accident. He was using his left hand until he died. He told them of those who would face some disgrace, those who wouldn’t be buried in one place. He said they would be buried in pieces and it happened.” The new Attah-Igala will receive his staff of office on April 27 at the Attah’s Palace, Idah, and this event also promises to be another major gathering of Igala sons and daughters.
By Tadaferua Ujorha
Share on:
WhatsApp

I found this helpful

I didin't find this helpful

President Buhari, Please save Igala land from insecurity
Next